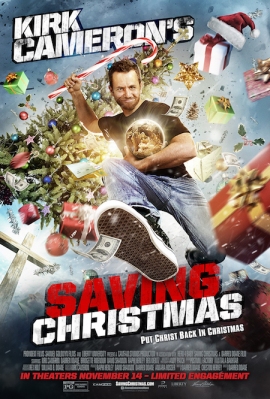 I was on a recent call with Kirk Cameron talking about his latest film, “Saving Christmas.” The film releases Friday, November 14th and will only be in theaters for a two-week limited engagement. While the promotions suggest the film is a sitcom, a genre that Cameron clearly mastered, it’s actually a narrated documentary with humorous and entertaining vignettes.

The production values and the style of the film are similar to that of a mega church Christmas production. While there were several golden educational moments in the film, I would’ve preferred watching a holiday sitcom, especially with Cameron at the helm.

With that said, the comedic acting was done well and I was surprised to find Cameron playing the wise archetype, rather than the main character. While Cameron got the lead billing, Darren Doane played the lead role who goes through a transformational change from a Faith-Scrooge to a Christmas-Believer.

The prominence of a wise archetype over the main character in the Christian genre is not new, as it helps to promote the ancillary materials and videos. And, with Cameron on a success track with his other endeavors (Monumental, Unstoppable and Fireproof), positioning him as the spokesperson made sense.

Cameron fielded an hours worth of questions and I was amazed that few were related to his film. Most questions on the call were about his philosophies as an Evangelical dad of six home schooled kids. To some extent the questions seemed to fit when you consider the majority of Cameron’s super fans are from home schooling families.

One of Cameron’s valuable tips suggested that one-on-one time with kids is best done in the natural moments that come up daily. He added that ideal family devotional time is in the car, eating dinner, and during other on-the-go together times.

The production was made in association with Liberty University, suggesting students had an opportunity to be a part of the feature documentary. Several of the key players involved were the same ones that turned Cameron’s Unstoppable into a box office success, making $3.2MM in two nights. Having watched both, there are great improvements in the quality of this picture.

Cameron is used to the success and takes it all in stride. “I think it’s a little different in your own home town where people are used to seeing you. You can go to Nashville and see a country music singer or Michael W. Smith or Casting Crowns, in a grocery store line and its not that big of a deal,” says Cameron. “But, if you’re from somewhere else and you come here as a visitor and you’re looking for people that you’ve seen on TV, then it is perhaps a little more exciting. So, it’s really no different for me. I run around signing an autograph here and there, but for the most part I can run errands and do my thing.”

To learn more about the film and find a theater near you, click here.