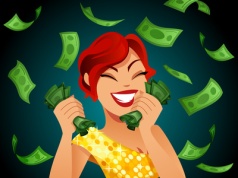 Paying points is a typical offering to cast and crew on low budget projects. However, most independent production companies never payout points because they never have it contracted – Just offered by word of mouth. Those companies that actually contract the points may have little left over to pay it.

I’ve used points for several film projects and it works well as long as the film has multiple release venues including video and television distribution. The only unfortunate thing the producer has to deal with is a lot of paperwork for years. To reduce the tracking efforts, many times a date will be picked to offer the cast and crew an opportunity to sell their points back to the production company for a certain dollar amount or for product.

Sometimes the payment is made with excess DVDs based on a discounted value. This allows the cast member to sell the DVDs for cash or give them away to friends and family during the holidays or for birthday gifts. I was involved in a points based project that paid me 300 VHS tapes. I sold some, but you can guess what my kids gave at every birthday party they attended for an entire year. Had I sold all the tapes at 50% off retail, I would have made 3X my normal production rate.

Points vary greatly between projects and so does the amount of cash involved. One project paid 20% of a person’s rate in cash and the rest in points. Another project paid 10% in cash, 50% in points, and 40% in DVDs. The variations to financial packages are endless, but the key concept to understand up front is that eventually the production company will want the points off of the books and will either have a cut-off date or a buyout date for the points.

Here is a made up breakdown of dollars to clarify what is available for point payouts:

Please note that in the above scenario the people on the point system are the last ones paid. It should also be noted that the film scenario brings the point people to breakeven, which means their payout for DVD and television sales will be much higher as the investor payouts will be much smaller going forward. This is due largely to the producer scaling the payback structure to reward himself should he make a hit. On the above scenario the investors’ payout schedule declines after they reach 2.5X their original investment.

Every monetary exchange percentage is highly negotiable. The general rule of thumb for the producer is to get as much cash up front from the distributor as possible since creative accounting can reduce payback after the film’s release. The same rule applies for cast and crew. However, if the only way to be a part of a certain picture is to be on the point system, make sure it is in writing and the film has multiple venues. Also make sure alternative payouts or buyout programs are in writing.

There is one other concern about the point system and that is the 100% ceiling. Since it is against the law to promise more than 100% of profits for payout, the total number of points given out will always equal 100%. So if the production company offers you 10 points and they give out 20 points in total, you own 50% of the payouts. If however, you are promised 80 points and they give out 1,000,000 points, then your percentage isn’t worth talking about, as it isn’t even high enough to be considered a rounding error.

Even if you get the estimated number of points in writing, there is a consideration clause for going over budget. So lets say you sign an agreement for 120 points out of 10,000 points and the film goes over budget. There might be additional points paid out to bring a new stunt team in for the mass explosion scene. The new total number of points rises to 12,000 changing your 1.2% payout to 1%. According to the above scenario, your $12,000 payout just dropped to $10,000.

Also, the above scenario of an independent film bringing in $140MM at the box office is a great scenario to spell out how the points work, but consider that the average independent film only makes $6MM at the box office. This puts approximately $6,000 into the points kitty for the cast and crew. Now your 1% equates to a nice dinner or a dozen DVDs. However, the additional venues of release will increase your payout.