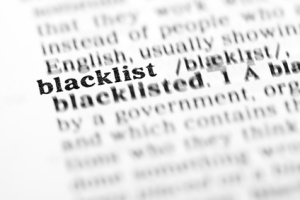 Hollywood blacklisting was run amuck from 1947 – 1960. It blocked screenwriters, producers and actors who were considered sympathetic to communists from getting jobs. The House Un-American Activities Committee (HUAC) investigated alleged disloyalties, which blocked 151 people from working, even though they were not convicted. The mere investigation based on someone alleging their possibility of being sympathetic was enough to shut the person down – Although the smart ones continued working under an assumed name.

While there is no active HUAC group in Hollywood today, there seems to be a new kind of blacklist running rampant in the media. It is the type that forces major corporations to make decisions based on image, rather than facts or logic. And, instead of being policed by the media, it is being driven by the media.

Last week Paula Deen lost her entire career including multiple book, television and other media deals because she chose not to allow a disgruntled employee to blackmail her. Since the employee did not receive her long sought after settlement, she released information on June 26th that 26 years earlier Deen had used the “N” word, which today is considered a racial slur.

Since that word is politically incorrect, the media used it to generate enough negative press against Deen that all of her sponsors walked away from her, blacklisting the entertainer from any future in the entertainment business.

“I’m about as politically incorrect as you can get. I’m wearing an NRA ball cap, eating a Chick-fil-A sandwich, reading a Paula Deen cookbook, and sipping on a 20-ounce sweet tea while sitting in my Cracker Barrel rocking chair with the Gaither Vocal Band singing “Jesus Saves” on the stereo and a Gideon Bible in my pocket. Yessir, I’m politically incorrect – and happy as a june bug.”

When I was a child, everyone was able to say whatever suited his or her fancy. Freedom of speech meant that a person could voice or publish any thoughts without filtering. Everyone could easily understand all the positions on an issue and respect each view, while choosing the one they would stand behind.

Today, it seems that if you aren’t on the side of the media, whether a person or corporation, you might be shunned by the masses as the media instructs them to judge you as being politically incorrect.

I find it disturbing that Deen lost her career based on something she said 26 years earlier. And worse yet, she used a word that our society didn’t understand was hurtful at the time. Thankfully our society got smarter and stopped using the “N” word, but I’m sad to learn that our past can be used out of context against us.

Last week’s issues made me think about words I used years ago like “G.I. Joe.” Today there are movies by the same title, which suggests it’s an acceptable word to use “today.” But, what would happen 20 years from now if that term became politically incorrect because women in the military took offence to it? Could I lose my career because I used the word as a small child playing with my G.I. Joe action figures?

I preferred the time in America when you could say whatever you felt was important without people blacklisting you. It was a time when freedom of speech meant we were free to voice all of our views, whether positive or negative. It was a time when Journalists sought after the truth and shared both sides of every issue equally, so their audience could draw their own conclusion.

So you tell me, has media blacklisting returned?

2 thoughts on “Did Media Blacklisting Return?”