Controversy is about to hit the conservative film market with the comedy “Blue Like Jazz.” The film, based on the best selling book by the same name, explores “non-religious thoughts on Christian spirituality.” The film’s vantage point is through the eyes of a Southern Baptist boy, Don Miller, who attends the “most godless campus in America.” This film holds none of the stigmas associated with “Christian films” and will shock those who assume it’s a family film – It is not. 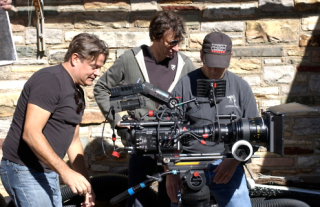 I chatted with Don Miller (Author), Steve Taylor (Director), and Marshall Allman (Actor plays Donald Miller) last night while the film was premiering in Nashville. The conversation was cut short when the three had to get back into the theater for a Q&A session.

Unlike the “Courageous” team who only hires people who are “right before God” to work on their productions, this film had hundreds of non-Christians in the cast. Don says, “It is not a Christian cast except for two people.” When asked how the non-Christians might have been impacted during the shoot, Marshall shared how in awe they were because “the atmosphere on the set was very different with a lot of people encouraging each other. It wasn’t like any other film I’ve been on in the past ten years.”

Steve Taylor was recently a part of some controversy relating to other Christian film producers stating online that they will never hire anyone who worked on this film. When asked more about it, Steve had nothing but positive things to say about other Christian filmmakers. He held tremendous respect for those who have made a difference through film and built the Christian film industry. Steve directed Michael W. Smith’s film “The Second Chance” and numerous music videos like the Newsboys.

Steve made it very clear that while Christian filmmakers were putting the film together, it was not going to be a family film. “The reason was simple,” says Steve. “How do you tell the story of a college kid who flees his Southern Baptist upbringing in suburban Houston to attend the ‘most godless campus in America’ without showing what that environment is like? And how can that environment be portrayed realistically in the context of a ‘family’ movie?”

During the film, Don meets all kinds of people including: gay, straight, bi, agnostic, drug-addicts, and abused. It was the Steve’s goal to show real people with real issues. However, Christians will be glad to know that everything that happens in the film leads to a scene where the true heart of the story is revealed – What some are calling the “most powerful scenes to appear in a ‘Christian film’ to date.” Spoiler alert — Don discovers through an epiphany what it really means to believe in and follow Jesus. It is a moment that most people can take to heart.