It’s easy to develop a single sided character, by saying he’s a maverick or any other stereotypical label like thief, Boy Scout, or law student. Using a well know label allows you to dive directly into your plot, requiring less screen time to develop the main character. However, using stereotypes hinders you from making a character driven film. 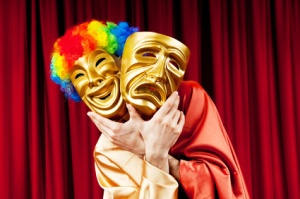 Developing a paradox within the character gives you leverage to expand the single story into multiple sequels or a series. Adding in the opposite characteristic under certain circumstances develops the paradox and a far more interesting character.

Pierce in M.A.S.H. was such a character. He hated war, but could never leave a wounded person behind. Every time he was due to leave another chopper filled with the wounded was inbound, forcing him to override his hate of war with his compassion for the wounded. His conscience wouldn’t allow him to walk away from a wounded person no matter how passionately he wanted to leave the war zone.

Adding a third dimension to a character, based on an internal secret that the audience doesn’t know, develops a greater emotional range and a far more realistic character. Many actors develop this angle within their own character to create realism, so it would only be natural for the screenwriter to supply it. The story angle could be absurd or devastating, but needs to be something the main character would never share. An example might be the main character having been raped by his drunk, abusive mother who never remembered the incident once she sobered.

This new 4D process was developed to reflect the real life scenarios of how people ebb and flow in conversation with the people or person they are currently communicating with through dialog. Some of these elements naturally happen, as a screenwriter writes conflict into the dialog. When planned out, the main character can be even more interesting and complex.

For this to work properly, the main character has to adjust his comments and actions based on those around him, or their absence. The best way to explore this dimension is in the form of a demonstration to the below questions. Whatever it is that he does, how does it make him act or respond:

Once you have this fourth element in place and you’re able to demonstrate it under one of the above circumstances numerous times throughout the film, you can then break the habit of him doing the action to instantly reveal that he has changed or grown.

This tool works best in showing how the character eventually grows to overcome his circumstances or the antagonist. The more subtle the demonstrated change, the more realistic the character and the story. These simple steps make it simple to create a compelling complex 4D character worth watching.