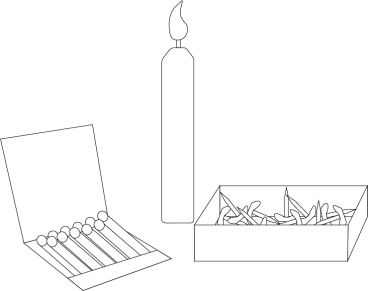 When I was in college, Oktoberfest was a big celebration in Wisconsin. One year, the local radio station had a competition to find the hidden medallion. The winner received thousands of dollars’ worth of prizes, major media coverage, and was honored in the parade. Every morning the radio station broadcasted a clue to help people find the medallion that was hidden somewhere within a half-hour radius of the tristate area along the Mississippi.

Known for my creativity, numerous people asked if I was going to solve the puzzle and reap the rewards. I decided to give it a try and found myself following the clues to within an inch of the medallion. I even rested my hand on the stone that covered the medallion. But I never lifted the stone to find it. Why? Because I had a functional fixedness bias from my childhood.

A common game we played in our childhood was called Hide the Thimble. The rules were that the person hiding the thimble had to place it in plain sight, so it could be seen from at least one angle without anything blocking it. My heightened observation skills made me a natural at winning that game. But in the case of the Oktoberfest medallion, there was no rule of it having to be in plain sight. I assumed the rule because of my functional fixedness.

The emotional pain I experienced when the station announced where the medallion was hidden, having had my hand on that very stone, was intense. I cringed when I realized that the reason the stone wobbled under my hand wasn’t that it was uneven, but because part of it was sitting on top of a medallion. Argh!

Today, I’m very conscious of any form of bias. I also practice interrupting patterns on a regular basis. The reason I work diligently at breaking away from functional fixedness is that innovation demands my mental freedom and the longer a person continues in functional fixedness the harder it gets to break free and think creatively.

Functional fixedness is a bias that hinders creativity—limiting people to only use an object in the way it was intended to be used. The opposite of functional fixedness is reflected in MacGyver’s ability to use common objects in a different way than originally designed. It takes a tremendous amount of creativity to use unrelated objects together for a solution, like using a cellphone camera as a mirror, a brick as a doorstop, or a quarter to unscrew a screw.

In moments when we feel less creative, psychologists suggest that we are likely caught in the functional fixedness mindset. This concept was first introduced by Norman Maier in 1931. By 1945, psychologist Karl Duncker designed a test to determine if a person held the bias or not. The test included a candle, a box of thumbtacks, and a book of matches.

The test subject was to solve a simple problem. The goal to find a way to hang a lit candle on the wall using only the materials provided. The person with a high degree of functional fixedness was not able to see the box of tacks as part of the solution. He could only perceive it as the container holding the useful thumbtacks.

The unhindered creative solution had the person dump the tacks out of the box. Place the box on the wall using thumbtacks and placing the candle in the box. Then the matches were used to light the candle. This simple solution is mentally blocked for many people who hold a bias that they are unaware of.

Unfortunately, many people who realize they are no good at solving these types of problems seldom take time to break the bias and improve their creativity. They typically state that they aren’t creative, allowing their functional fixedness to grow more powerful. The only way to reduce our unhealthy biases is to build and empower our creativity.

There are three steps I use to break free of functional fixedness:

Today’s culture suggests that problem-solving is a logical practice because of functional fixedness. To use the right side of our brain, where most of our non-diagnostic troubleshooting skills reside, we have to make the problem abstract. This can be considered a form of play, which opens our mind up to all possibilities.

Sometimes I pretend that I’m living in a sci-fi world where normal rules of nature no longer apply. This creative world-building allows me to look at a problem from new vantage points because it distills the issue down to its core elements—surface issues that typically hold our attention due to bias fade away.

Drawn from Alternative Fields of Knowledge

Once I’ve exposed the bare essence of a problem, it is easy to see similar issues being worked on by professionals in other fields. This allows me to draw from their expertise in how they work the basics and transfer them to my situation. This process typically fuels my creative thought process and feeds me new perspectives and ideas worth exploring for my specific problem.

Play with the Inspired Possibilities

At this point in the process, my thoughts are freer of bias and I continue to play with the ideas. This is the stage where I keep all possibilities open for as long as I can, not wanting to take just the first solution that pops into my head. The playful stance during this phase of the process allows me to explore multiple solutions so I have a few to choose from.

Freeing our creativity requires the breaking of strongholds like functional fixedness. A bias never self corrects, so we must purpose to change our viewpoints. By acknowledging our bias, we can focus on strengthening our creativity and fuel our future with a greater ability to problem solve and innovate—making us a valuable resource for our company, community group, and family.

If this article has helped you, please consider helping me offset the costs associated with this blog by clicking the button below.