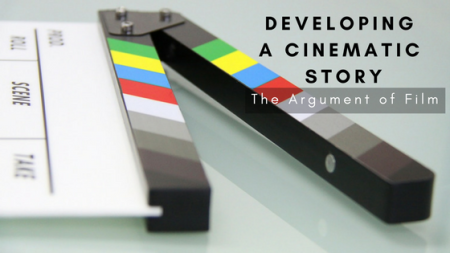 Independent filmmakers are known to dive into projects without fully developing their story. Some come up with a cool scene idea and toss together a film to facilitate what’s in their mind’s eye for that 2-3 minute segment. The words that flow from their lips two years later is something like, “It didn’t quite turn out the way I pictured.”

The reason is elementary: Film is an argument, and the scene didn’t attempt to address anything worth arguing about.

The first place I’d check out, if given a new time machine, would be that large room where the Constitution of the United States was argued. I can imagine a group of passionate men fueled by their ideals on freedom of speech and religion, and the increasing weight of taxation without representation. It was a venue of the greatest arguments in the history of our country.

Great films cover both sides of an argument. The development process determines how the filmmaker will visualize the argument and lead the audience from a general understanding of the topic to his perspective. But most independent filmmakers can’t tell you what their film argues, which gives insights into why their film will fail at the box office.

A couple months ago, I watched an independent film that will fail during its release this summer because the story’s argument wasn’t explored with the audience, but rather was covered over by 22 unrelated messages. In fact, the argument was so underdeveloped that it took me the first 45 minutes of the film to determine who the main character was and his goal.

Here are a few guidelines that I’d like to suggest to new filmmakers for their consideration during the development phase of their motion picture:

A simple way to develop a premise is to use an outline similar to the following:

[Title] is a [genre] about a [hero] who, after [big beat that happens to hero], wants to [hero’s desire] by [hero’s plan], which becomes increasingly difficult because of [obstacles/complications].

This quick formula will get your story launched in your mind’s eye and help you to immediately see if the story can be further developed. Here is a sample using The Fugitive that I tweaked for readability.

The Fugitive is a thriller about an innocent doctor who, after being sentenced to life in prison for killing his wife, escapes to find the real murderer, which becomes increasingly difficult with a determined Marshall hot on his trail.

Once you have your argument and premise, the next step is to determine how to weave the two ideas into a compelling story. The throughline will drive the audience’s interest, and the visual depiction of the argument will alter their perception of culture and their future life choices—that is, if the story is well crafted.

A well-designed argument that takes a person from a common view to your perspective is entertaining and can help audiences make culturally significant life changes. Since the motion picture is an argument, it’s easy to see why films have driven our culture for over a hundred years.

Our rich history of cinema suggests that filmmakers must learn how to properly develop their stories for the silver screen. To help encourage filmmakers move in that direction, I’m going to pull together some steps worth sharing in future blogs.

How about a hot drink to thaw my fingers from this frigid Chicagoland so I can type another blog? If you’d like to help, please click the button…