Years ago my company created art for a museum that had a specific deadline. Everything needed to be mounted and in place for the grand opening of the new display. The press was coming out in full force and the curator just hung up the phone after pushing me for a specific delivery time. He made it clear that I had 42 minutes left to deliver the final artwork. 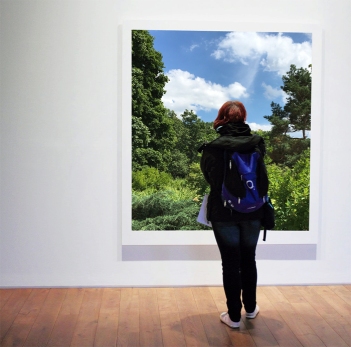 I felt my muscles tighten and worried about the onset of a heart attack, even though I had no family history. The emotional drama within my body felt like a tsunami was collapsing all around me and I was unable to surface for a breath of air. The worst pressure came while I waited for the subcontractor to finish the arduous process of laminating the art to meet ultra high museum archival standards.

Everything around me started to waver and the room sounds dropped to a deafening quiet—I was passing out. I asked the person next to me if she would mind me lying down on the floor. She looked concerned and nodded a willing “yes.” I dropped to the floor, turned onto my back and wondered how I got in such a spot.

Staring up at the lights was a weird phenomenon, especially when I realized that there were four things that I could do to change my response to the circumstances.

Accept the Worst – Everyone who feels they are falling into an abyss of the unknown needs a solid baseline from which to start their recovery. By accepting the worst-case scenario that my imagination could realistically paint, I was able to stop the sense of pending doom. I no longer felt like I was in a free fall and could work on my choice of thoughts.

Change the Perspective – Turning the corner from a negative perspective to a positive one forces my feelings to follow. A small sense of glee rises when a person stops thinking about their cup of lemonade being half gone and decides to savor a second half-cup more of delight. The positive person can even pick up on how the second half of the drink tastes a tad sweeter due to the sugar settling over time.

Release the Rigid – Facts typically raise its ugly head the moment a person tries to see an opportunity in its best light. After all, we’re taught from an early age to think logically about the situation when a swift deadline appears to be statistically out of reach. The choice to turn the ridged facts into a moment of flexibility brings relief and experimentation—the very thing that fuels creativity and solutions.

Think Creatively – Taking advantage of the freedom found in flexibility energizes the creative soul to see the circumstances as an opportunity to be a hero. Once pulled off, the client will trust their vendor no matter how unrealistic the schedule. And, they’ll even be willing to pay higher dollars for “miracles” knowing the job will get done right and on time.

Strength surged through my bones as I stood up and brushed the dirt from my slacks. I suddenly had the stamina to complete the task and I was ready to be a hero. I had the opportunity to prove my team’s skills and commitment levels. Oddly enough, I also felt comfortable in the middle of the calamity.

Within seconds the subcontractor handed me the pieces of art and apologized for the delay. I thanked him and smiled when he handed me the invoice that read “No Charge.” He thanked me for the opportunity and asked that I consider his firm for future work.

I pulled into the customer’s loading dock and was met by specialists who care for archival quality art. They were ecstatic that the quality exceeded their requirements and worked diligently to install the new display.

The client pulled me to the side and apologized for the pressure he had placed on our team. He learned ten minutes prior that his boss gave an earlier deadline to avoid being embarrassed in front of the media.

I left with a large check that included a bonus. More importantly, I left more capable of managing my emotions based on choice, rather than arbitrary circumstances. And, I had learned how to turn crisis energy into the stamina necessary to complete a project in the midst of turmoil.