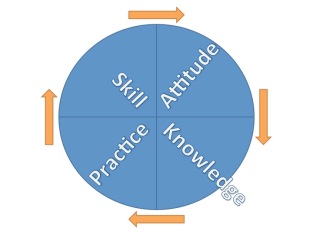 I led a master class and several workshops at a conference last week. My goal was to take the students through the mastery cycle without them knowing it. The outcome was eye opening during the debriefing stage of the conference – The time when reality revealed where on the master craftsman scales each person landed.

The mastery cycle has four parts to it: attitude, knowledge, practice, and skill. The attitude step is all about adjusting one’s dreams to a reality check without draining their vision. Increasing their knowledge is the second step that requires a certain amount of entertainment in order to retain the information. The third step is practicing with a coach who can guide and correct each step of the way. The fourth step is the development of a specific skill that can shine during the process.

Once the process concludes, it’s always useful to debrief the participants and find out what they achieved or learned. Everyone gains a new skill (or part of one) or learns how to avoid a disaster going forward. Both are needed for the master craftsman’s utility belt regardless of their occupation.

ATTITUDE ADJUSTMENT
My classes were filled with beginning filmmakers and semi-professional amateurs. Both groups typically have a great aptitude for filmmaking, but greatly lack the skills needed to climb to a higher level of quality. Since its impossible to get to the next level until you first understand what you don’t know, adjusting the attitudes of the participants is critical to their growth.

I opened with an example of a finely crafted short story that an amateur would shoot for less than $10,000 and a professional would shoot for no less than $265,000. By explaining the difference in quality, story, skill levels, etc., I helped many of the students correct their vision and desire more skills.

INCREASED KNOWLEDGE
The next class was about how to develop a story using a simple logline as a blueprint. Loglines are one to two sentences that clearly articulate the overall story. Any variation due to overzealous creativity in the process weakens the story and hinders the film’s success.

The class developed the beats of the story based on the logline and then wrote a script to be shot the next day. Everyone in class got caught trying to take the story down a rabbit hole, but the team maintained focus thanks to the agreed upon logline – a safety net to make sure the chosen topic is adhered to.

PRACTICE WITH COACH
The day of the shoot was guided by the experienced training the inexperienced. We had hoped for a professional team coaching an amateur team, but circumstances didn’t come together as planned. Still, the experienced were able to help and encourage those with less experience. Three scenes were shot and then debriefed the following morning.

We reviewed the dailies and discussed the pros and cons that came from the shoot. And yes, there were more cons, but I prefer to say there were more learning opportunities. As long as the person learns from his or her mistakes, they are another step closer to mastering their craft.

During the shoot the director is in charge. He must hold true to the logline, the script breakdown, his notebook, and all the other tools he has in delivering the final story based on its original intent as expressed in the script. Unfortunately, the director was so busy trying to keep his cast and crew moving that he forgot to refer back to his notes.

The outcome was some really good shots and acting that had nothing to do with the story. During our review, I pointed out as many of the errors that added to the destruction of the story and why each person failed. I also pointed out that with film being a collaborative art form everyone must stay on task, rather than offering up things that don’t move the story forward.

SKILL DEVELOPMENT
Each participant got a taste of a new skill they need to develop. The director learned how to breakdown the beats of the story to make sure they are filmed. The actors learned the importance of becoming the character instead of changing the character to be like them. The writers learned that creatives can make things up all day long, but must only keep what fulfills the logline. And on it went.

The process that led to the beginning development of a new skill can now be cycled again to lift that skill to another level. The repetition will eventually see the person master the skill and others for his utility belt, which will eventually lead to the mastering of the craft.

The person who embraces the mastery cycle will eventually become the master and be able to properly break the rules in order to move the art forward. They are also the ones who are passionate about the art. They are the perfect type of people worth having on any set and in any workshop.