This Thanksgiving I wanted to give thanks for the inspiration I received for the first story I ever wrote. It was ever so slightly rewritten and I hope it is still a blessing to my readers. 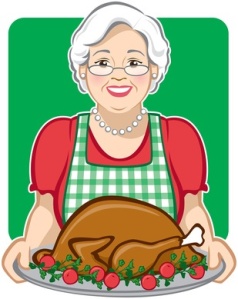 The snow lightly fell outside of the big picture window where little Johnny leaned against the back of the couch. His eyes sparkled at the small fawn crossing his grandfather’s snow covered lawn in the north woods of Wisconsin.

The smell of turkey snuck up behind Johnny, as his grandmother kissed the back of his head on her way to the dinning room table with the platter. Johnny spun around and caught a glimpse of the golden brown turkey, as it was set on the table in between the sweet potato and dressing.

Johnny kicked his feetsy pajama covered feet out and dropped with his seat landing squarely on the couch. He slipped off the edge and took his place at the dinning room table next to grandma.

In place of a traditional prayer, grandpa suggested each person take a moment to thank God for the simple things for which they were thankful.

It was Johnny’s turn and he leaned back in his chair and took pause. The others were curious and wondered what was going on in his little mind. He thought and he thought, bringing smiles of anticipation to each one at the table.

“I wonder what Daddy is thankful for,” questioned Johnny.

A warm smile came over everyone in the old Chicago gym where Johnny’s dad was dishing up turkey for the homeless. A tear of joy rolled down the cheek of a mother holding a small child on her hip. A man with long stringy hair and a stubble face smiled as he received the turkey leg. An old woman reached out her shriveled hand and patted Johnny’s dad on the shoulder, “Thank you for giving up what you’re thankful for, so we might be thankful as well.”

Johnny smiled and said, “I’m thankful for my dad and I’m going to grow up and be just like him.”

And so, that Thanksgiving day everyone found something to be thankful for and shared with each other generously from the depths of their heart.