Quest for the Nail Prints in Development #001 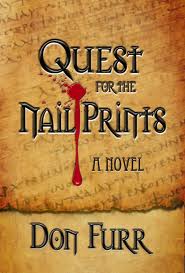 Not to be confused with “Working Title,” which you may have been following in my recent blogs, the Quest for the Nail Prints production schedule has been moved up. Quest is based on the book by Don Furr, who has agreed to pilot the medevac helicopter in the film – A great cameo for a real life pilot.

This faith based adventure film requires a cast and crew of 300 people including 60 speaking roles. When asked about the style of the film, I typically suggest its like Adventures in Odyssey meets Indiana Jones. Top Hollywood stars, who are familiar with faith based films, are being approached for the three lead roles. We have a winter start date.

The story is about Pastor Paul Ryann who breaks his promise to his wife when a junior high kid’s bad choice prompts him to intercede. Returning home two hours late, his wife sends him on their anniversary trip to Israel alone, in hopes of him learning how to respect her.

During his flight, Paul meets two traveling companions. Together, they tour Old Jerusalem and stumble upon two men assaulting a woman. The men notice Paul shooting a video of the incident and chase after them. They dodge in and out of crowds and alleys until they duck into an old dark shack. Just when they think it’s safe to step out of hiding, the floor gives way and plunges them down into an ancient stone well.

As the water rises, Paul, in true “Indiana Jones” style leads the three to safety. When they emerge, they find themselves thrust back in time to the year 33 A.D. during the triumphal entry of Jesus of Nazareth in Jerusalem. During the week leading to his crucifixion, the three are loved by the Master and forced to face their deepest internal pain. Filled with new vitality, Paul struggles with the decision of saving Jesus from his harsh death and making sure it happens.

Translating the book to a screenplay was a long and difficult process. The word for word translation suggested the film would need to be six hours long. Through careful crafting and positive approval from the author, the story has been trimmed to a full two hour adventure film that is packed with awe inspiring moments.

I’m looking forward to sharing more on this story as we develop the picture.

One thought on “Quest for the Nail Prints in Development #001”