Attention Getting Devices Embedded in Scenes 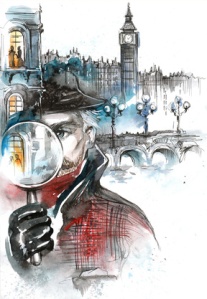 Speakers start off their talks with some form of attention getting device. Newspapers use a headline to draw the person to a newsstand in hopes of them picking up a paper. Book authors try to capture the reader with a snappy cover, title and great first paragraph. Movie posters use imagery and star power to attract the passerby. Even movies open with some opening imagery or teaser to pull the audience into the story in the first 2-5 minutes of the film.

Mega box office features use large scale, fast action, and cool visual imagery as attention getting devices. Dramas use a point of fascination within the story coupled with raising a question within the audiences’ mind about how the story will paly out or resolve.

I was chatting with screenwriter Guy Cote last night about how attention getting devices are no longer restricted to just open a film, but are now needed in a more subtle, but still effective form within each scene in a movie. It’s Guy’s view that there has to be something special in every scene that entertains the audience and I agree.

I looked back at the courtroom drama we co-wrote, Tried & True, and realized we did that very thing. Every scene has some form of entertainment in it, which forces the story into a more cinematic mode, compared to the film being limited to a direct to DVD release or television.

The BBC’s Sherlock MOWs are fascinating, as every scene has some entertaining nugget or reveal in it. I’ve watched all 7 episodes and can hardly wait for the 3 that will be released this year. Each 90-minute episode could be successful in theaters and keep the audiences’ attention, but the BBC decided to release it on television – In my opinion, raising the standards of television.

The average number of stars on a 10-point system that critics have assessed the Sherlock shows is a 9.2 over the 7 episodes. This is amazing when you think about maintaining such a high quality of story within 10 stories over 3 years. Its no wonder the series is a huge success internationally – Everyone loves a high quality entertaining story.

Here are some of the attention getting devices that are salted throughout every scene in Sherlock:

Universal Question
A question in the form of a mystery is revealed at the beginning of every episode. This drives the audience to watch the film until they get the question answered. In most episodes the question is associated with a murder that must be solved within a certain time constraint to drive the audiences’ need to know the answer with a sense of urgency. In some scenes additional questions get raised or it’s revealed that the universal question has more parts to it.

Relationship Reveals
The unique relationship between Watson and Sherlock is like an onion that has one layer peeled a way with each story. The characters are both clearly experts in their fields, which generates mutual respect and a sense of friendly unspoken competitiveness. This drives the audience to know more about how and why they get along so well, even when the relationship appears dysfunctional or miraculous – Both very entertaining prospects worth exploring.

Hyper Focus
Sherlock’s level of genius brings boredom into his life all too quickly. He needs extremely difficult puzzles to solve or his insanity rises. This demand on his soul for stimulation drives him to observe the tiniest of details and drives a fascination in the audiences’ mind as they watch genius at work. Everyone loves watching extreme experts do their thing like Michael Jordan playing basketball, Luciano Pavarotti singing lyric opera, and Sherlock solving unsolvable cases.

The above attention getting devices are salted generously throughout each scene. These entertainment moments are embedded organically in each scene making it’s existence mandatory for the progression of the story. In fact, I can’t recall seeing any scene that didn’t have to be in the film. Nor was there any scene that didn’t have something specific for the audience to enjoy or chew on.

The series also used a good deal of humor to help the audience rest just long enough to be refreshed and then reengaged into the mystery. By allowing the audience to get their emotional wind back, they were ready to receive more information and attempt solving the case as junior detectives. Each viewer was bound to walk away from an episode longing to be more like Sherlock, or at least feeling driven to be the best in their field.