In the day and age of uploads, many actors find themselves performing to a camera in their living room and uploading their interpretation of the character. The better the camera, lighting and the actor’s understanding of the character, the better chance of he or she has of making the cut, or not. 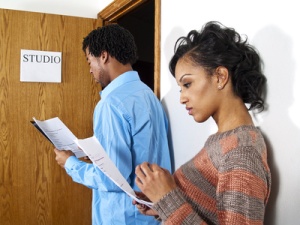 Inexperienced directors, who are unsure of the rehearsal and audition process, often settle for actors who have learned certain skills that present a superficial reality, rather than properly develop a character that captures the hearts of the audience. When this occurs, the director typically gets whatever they see in the audition in their film, rather than a truth based, believable character.

Instead, the director should focus on 3 key audition elements:

The Right Actor for the Right Role. The Back To The Future trilogy made box office history because Michael J. Fox was the perfect person to play the role of Marty. His timing was impeccable and his actions were an ideal fit for the character’s adventure. However, Eric Stoltz was first hired to play Marty and three weeks into production, Director Robert Zemeckis realized he had hired the wrong actor. He immediately let Stoltz go and hired Fox.

The director’s job in the audition is to make sure he is getting what he thinks he is getting. He needs to work with the auditioning actors and explore the development of the character using sides. While working with the actor, the director should be asking himself the following questions:

If several of the above questions get a positive response from the director, it is a signal that further exploration should take place. However, if most of the above items aren’t checked off, the director has one of two choices to make: Shoot a film that doesn’t match his vision; or, Search for another actor.

A Truthful Performance. Many independent films have good performances, but lack great performances. This is due largely to the fact that middle range actors are readily available and have memorized certain actions, looks or gestures that work on screen, but are superficial. Seldom do independent film budgets allow the director and actor to develop a character that is captivating. Most settle for the memorized gimmicks and quick cuts.

Experienced directors know to look for key abilities in their actors by asking themselves the following questions:

Directors struggle when faced with a name actor that won’t take direction. Not only does the performance lack truthfulness and believability, but it also falls short of the director’s vision.

A Great Working Relationship. On one project I have in development, the producer suggested we use Al Pacino as one of the three main characters. After reviewing his work, I realized his performance was either hot or cold, depending on the film. I asked the producer to do some research and we soon learned that when he has a great working relationship with a director his performance is award winning, and when he doesn’t have a strong relationship, his work suffers – A risk I wasn’t willing to take.

Directors know there is a balance between getting an actor’s performance to perfectly match his vision, and drawing from the creativity that a talent brings to the set. This collaborative process is key to the film’s success.

It reminds me of Tom Cruise’s collaboration. You will never see Cruise running down steps in an action movie. He learned from several productions early in his career that he looks awkward, not macho, running down steps. Whenever he’s in a good collaborative mode with his director, they reposition action to improve his macho look.

Directors keep their eyes open during the audition for the following:

Anything shy of learning the answers to the above 16 questions makes auditions a complete waste of time.  The trend of seeking audition reels is no better than receiving headshots, as none of the above critical questions can be answered by watching a series of clips – It’s all about the collaborative process that builds a great relationship between the director and actor.

One thought on “Directing a Great Audition”