Fun Size is a comedy that was undersized for the audience. It didn’t have anywhere near the impact or humor that industry executives had hoped. Many were expecting director Josh Schwartz to take over for the late John Hughes who brought us classic coming of age films like “Home Alone,” “Beethoven,” “Ferris Bueller’s Day Off,” and “The Breakfast Club”.

Schwartz’s freshman film had the right cast, but poor execution. There was nothing cinematic about the story and its imagery was less spectacular than many television shows. It might have faired better on Nickelodeon than in theaters, especially since screenwriter Max Werner delivered a flat script, far from his normal work on the Colbert Reports.

Tween sensation Victoria Justice held the lead role of Wren, but she was given nothing to work with. All the other characters had better dialog, more action, and unique costumes, leaving Justice with nothing but her sheer ability to perform. Even her electropop music video at the beginning of the film lacked the panache required by the silver screen.

The large amounts of product placement within the film aimed at tweens and moms were incredible. It was so abundant, that it took me out of the story several times. However, the teens I sat next to saw it as a wonderful time to chat, just like they do at home during commercials.

The movie was also filled with messages aimed directly at tweens. Most of the messages were covered over with various bathroom jokes, “boob” and “butt” innuendo, and various forms of Halloween violence that most everyone puts up with. However, there were several deeper messages so well crafted that discerning tweens and teens might miss it. 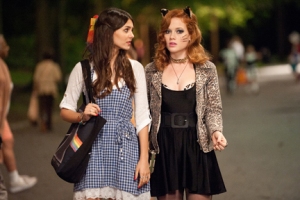 One of these messages came from two lesbian characters. Jackie (Ana Gasteyer) and Barb (Kerri KenneySilver) were down to earth, overachieving moms to Roosevelt (Thomas Mann), sidekick to Wren (Victoria Justice).  While the characters are a bit kooky, they raised the most “normal” teen in the film. They were not referenced as lesbians, but as great moms. While they were comedic, the other characters respected them.

Hollywood is working overtime to change the norms of society and this film’s messages are in sync with that movement. Bringing awareness to society about gays and lesbians is no longer a part of the agenda, as this was accomplished a few years back. The next phase is about resetting the norms of society by making these characters the most “normal” and accepting individuals in stories.

Regardless of the messages, I don’t recommend you, or your teens/tweens watch this poorly made film. Nor do I recommend it as a video rental later. The story was overly predictable, flat, and had little value worth watching. The teens sitting next to me were even bored. Although, I will say it was refreshing to watch Chelsea Handler, one of the raunchiest comedians of all time, playing one of the least raunchy people in the film.