Strong leaders know that passion motivates their team and produces high returns on their products/services. This passion is the heart of the company or the reason why the company does what it does. It’s the one filter that everything being worked must be analyzed through.

I recently reviewed a film script that was being produced by an Atheist and a Christian. I found it fascinating that they set their religious differences to the side in order to make a great story. I was also eager to see how the film turned out due to the diverse passions they brought to the table.

However, the screenplay had some major flaws in it. I asked both men how they’d deal with the hole in the plot and they both instinctively knew how the story needed to end, but couldn’t understand how to get there. So I asked if they’d like my input and they agreed.

I asked one question: Why are you making THIS story?

They both answered in almost perfect unison, “To show the audience that people can change with every choice they make including the decision to show a weaker person kindness.”

Here is how I responded…

If a person is going to change, it needs to be the protagonist. (Although other characters can also change.) Therefore ACT 1 must show the unchanged protagonist in his normal flawed life. In ACT 2A, the protagonist must be introduced to the possibility of change or at least the contrast between his current life and his possible life. In ACT 2B, the protagonist must battle through his internal and external obstacles to overcome whom he is to give room for who he can become. In ACT 3, he must look at his flaw from a new perspective and turn it into the thing that catapults him through the change into his new life.

The restructuring of their story based on their agreed “why” drove a dynamic rewrite that made the story award worthy. It also drove their shared passion into the story itself. The rewrite was simple when they filtered every thing through their powerful why.

In the independent filmmaking business, the number one thing that kills great stories is when the writer loses track of the why. Writers are naturally drawn down interesting rabbit holes that take the story in a significantly different direction. The only way to stay true to the story is to understand why you’re writing it to begin with.

When I created Tried & True with Guy Cote and Anthony DeRosa, I started the story with the following why: To help people realize they are trapped in a comfortable, false freedom and need to break free to experience a true adventurous freedom that is available to all who seek it.

Unfortunately we didn’t use the why as a filter during the writing process and ended up having a different story with each draft. Each version would make a great film, but there would only be one version that matched our passion – The one we had neglected to write. It became clear that one more run at a rewrite was necessary to birth the version that we could all passionately get behind.

Filtering everything through your why will keep you focused and headed in the direction you originally intended. Everyone has a why to follow, whether in business, among family, or in creative endeavors. And, everyone can shine brightly in a profound way that the world needs when their life’s output reflects their why.

The Heart of an Artist 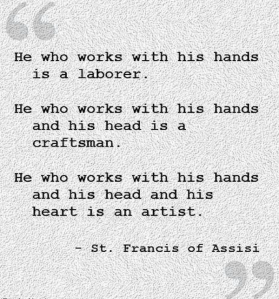 The Artist is a powerful creature who makes a difference in our lives. He creates for us beauty from ashes, the oil of joy for mourning and the garments of praise for the spirit of heaviness. He makes us laugh in spite of our dire circumstances and brings a tear to our eye when we need to be reminded of our humanity. The artist is a healer of our soul and one who inspires us to be our better selves.

I’m giving an inspirational talk tomorrow night to a group of business people on the topic of artistry. It’s my hope that those in the room who have mastered their craft or developed great business acumen will consider how they might bring heart into their workplace.

The opposite also rings true. To be rejected for who you pretend to be generates an unprecedented level of bitterness, while rejection based on who you actually are tears the heart, unless you’re confident in who you are – then it doesn’t matter.

The amount of power we find within ourselves when we fulfill who we were made to be is tremendous. It makes me wonder if those who fear the strong are the ones who program society with the hope of achieving some form of a safe haven, without any divergence. The fearful are rarely strong enough to be themselves and hide behind a cloak of societal pressures and political correctness.

It’s therefore the artist’s job to bring awareness to the masses in hopes that enlightenment might grip the heart, mind and soul of the downtrodden. To that end, all artists who choose motion pictures as their venue of choice must find new ways of expressing themselves to bring insight and hope to those around them.

Artistry isn’t black and white, but millions of colors. It takes on different forms and may even be misconstrued at times. I remember one person shared her feelings after reading one of my short stories. She was so spiritually touched that she suggested I become a pastor. A man told me after seeing one of my patriotic works that he’d vote for me if I ran for office. A teenager who felt empowered by one story suggested I become an advocate for women.

The great thing about art is that it opens minds to consider things of the heart. These people weren’t impressed by my stories and films, but by what already resided within their own heart. My art just helped them to see the one thing they held deep within themselves. It only took a spark to fan into flame their dormant passion.

The day will soon come when the people who watch or read my art will no longer suggest I become that thing stirring within their hearts, but instead will embrace their own passion to make the world a remarkable place. For its art that brings each of us to the place we need to be in order to make life-changing decisions that will touch our communities.