A group of filmmakers got together this week to share insights into the world of filmmaking. Every person that spoke shared one of their stories of struggle to climb their too familiar ladder one rung at a time. The resounding truth that all shared was of someone giving them an opportunity after having noticed their hard work, diligence, and stick-to-itiveness.

A film set is typically filled with lots of people that carry stars in their eyes and a core group who are willing to do whatever it takes to master their craft. The funny thing is that a film can easily eat up an entire year of a person’s life with only two weeks of the workload being related to glitz and glamour. The vast majority of the time is relegated to some of the most strenuous work and harsh deadlines experienced in the industry.

This natural filtering effect results in few who survive the world of filmmaking. Only those driven by an internal passion strive to create the life-changing art that splashes on the silver screens across the world—each story challenging or supporting a cultural change when aimed at the general public. 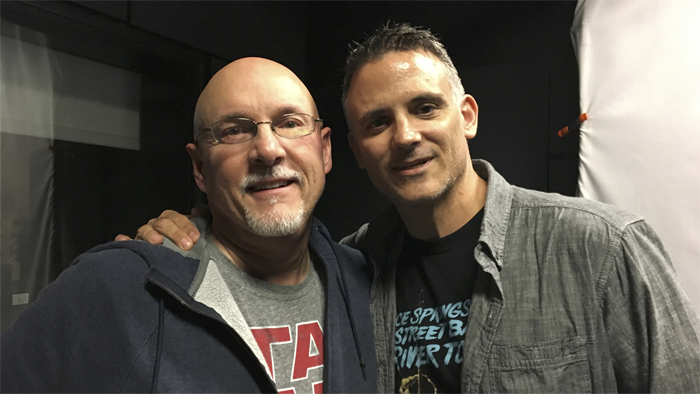 Bob Beck is an actor and stuntman who understands the grind of the movie set. Having never met Bob, I was pleasantly surprised to learn that he and I shared a couple of scenes in The Dark Night, proving once again that the world of film is very small. Bob spoke at this event I attended and warned newcomers to make sure they always treated the production assistants, the lowliest of positions on a feature, with respect.

“Today’s PA’s are tomorrow’s directors,” said Bob. “You never know who you’ll be working for in the future, so treat everyone with respect.”

After the gathering, Bob shared with me how he was talking with a guy on set that was dressed on the unkempt side of the spectrum. He was thankful that he had treated the guy with the same respect as he tries to do daily with everyone, because within the hour he learned the man was the producer.

Bob shared additional experiences from Chicago Fire, Chicago PD, and other films he’s performed in. We were also treated to a short film he shot as a fun project with several of his stunt friends. I’m sure you can imagine that the film was nothing more than a bunch of guys creating well choreographed mayhem, which was very entertaining.

Can you imagine being invited to a party put on by stunt guys? Years ago I attended one that broke out into an incredible fight with bottles breaking over people’s heads, men slamming through tables as they crashed to the floor, and a few women jumping from the rafters onto the backs of their alleged bullies. It didn’t take long after the adrenaline jolt for the team to move the crowd into the dance room to continue the party on a less dramatic level.

Bob shared how he got his start in film acting and later stunt coordination. His humble beginning was as an extra who happened to be standing in the right place at the right time. Since the picture had just lost a stuntman due to certain conflicts, and Bob was about the guy’s same size and build, he was asked to step in and let the stunt experts beat the living daylights out of him, using pulled punches and the like.

A few bruises showed up after Bob went through numerous takes of the beating without any pads on his body. His penchant to do whatever it took to make sure each take was excellent caused the stunt coordinator to notice him. The man decided to show him grace by rewarding him with an extended contract, changing his life from working in his dad’s business to the film industry. 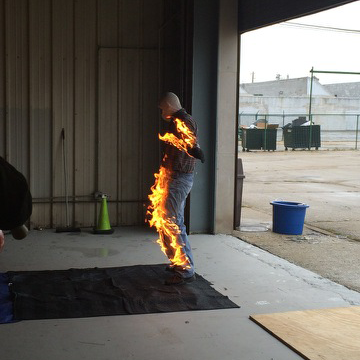 Thankful for his career, Bob continues to master his craft and learn the latest techniques to be engulfed in flames without being burnt up, while having a Chicago Fire star drag him through the burning hallway during a rescue attempt. And yes, the flames are real. Controlled, but real. Even while coated with the fireproof gel that’s layered on his head, Bob’s face can feel the extreme heat as he gets within inches of the flames for dramatic affect.

The life of a stuntman is rigorous and calculated. Safety measures are taken to ensure success to whatever degree is possible. Some stunts are repeated several times to get just the right angle of action for the camera. Bob is already attached to his next feature, but due to non-disclosure agreements wasn’t able to share the details. Suffice it to say you’ll be seeing him continue to push the envelope for your entertainment.

Please help support the addition of sound equipment for future podcasts on this site by donating with the button below.