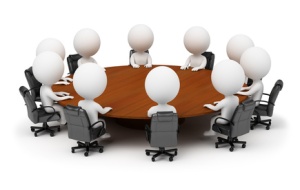 The vice president of Sales and Marketing approached me a week before the big trade show. He said he’d be joining me for dinner to meet one of my clients on the first night of the conference. He also made sure I understood the severe consequences if I didn’t set up the meet-and-greet.

Just before we sat down for dinner, I introduced my client to the VP. I was surprised to learn that the president of my division was also invited, along with two other executives and their guests. The dinner for three barely fit at the table now set for eight.

Then came another surprise. The president suggested that I start my presentation before the food arrived. Presentation? What happened to the meet-and-greet? The VP instructed me to begin. I wanted to confront him, but didn’t know how, so I dove into an off-the-cuff presentation.

The client, who agreed to a meet-and-greet, not a presentation, quickly interrupted and clarified what I already knew; He couldn’t do anything until he received his next budget in six months.

It was no surprise that I returned to a pink slip back at the office and was promptly escorted out of the building. I never learned if the dinner was a set-up, but I did wonder how things might have been different had I confronted the VP. What would’ve happened if I took two minutes at the table to persuade the executives to understand that the dinner was scheduled as a meet-and-greet, and nothing more?

The most difficult situations I’ve experienced always came down to a defining moment that was either won or lost during a two minute conversation. Being able to present a persuasive viewpoint in two minutes can separate those who are embraced in business from those who are rejected.

Everyone in business can present a persuasive argument by following four simple steps that can be formulated in the moment.

The above steps can be shared in two minutes. Defining the problem and getting a quick buy-in will take about 45 seconds. Sharing a similar experience can take 30 – 45 seconds. The benefits achieved will take 15 – 30 seconds and the call to action only takes 15 seconds.

Using these steps during an unexpected meeting with executives will clearly demonstrate great leadership skills, an understanding of the business, and insights worthy of consideration. It may also get you promoted to the task force for follow through – A chance to demonstrate additional leadership skills.