Behind the Scenes, Filmmaking 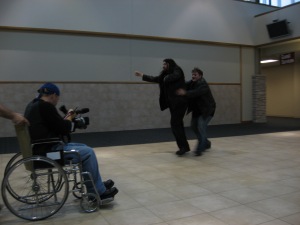 The actors did a great job and we were ahead of schedule. It was time to move inside our location when the DP asked if his team could shoot a dolly running shot. The coverage wasn’t needed, but I always liked exploring other shots after we fulfill the preplanned list, so I gave him the approval and moved the rest of the cast and crew inside.

Since there wasn’t a lot of time to set up the dolly move, the assistant cameraman stepped inside the building and grabbed one of the wheel chairs that are available for visiting guests. The camera operator sat in the chair, held the camera at street level and then was pushed by a grip jogging behind him.

The shot of the actor’s feet running across the pavement was impressive and thanks to the stabilizing lens the shot was smooth. It also cut very well into the comedy and increased the visual pace to set up the next scene’s punchline. The idea worked so well that we decided to use a similar set up for the interior mall running scene.

I would never have thought of the selected shot or realized how well it set up the punchline if it weren’t for padding our shoot with time for creative thinking. Here are the steps I take when planning a shot list.

By budgeting time according to all five groupings of shots, I’m able to prepare the shoot for the greatest amount of flexibility. If the scene doesn’t go as planned or the actors struggle with their lines, we won’t get to all five lists, but I’ll know the story is covered.

This type of built in flexibility tends to find great shots that capture the audience’s attention, draws them deeper into the story and generates chatter during award season. In fact, I remember one creative opening shot that was brainstormed on set because we had paid for a crane and wanted to make sure we got the best possible use of it.

That forced perspective stimulated a long running crane shot that locked down into a visual effects shot, which brought in three awards. Prior to that shot, it had been impossible to use a crane shot as a visual effect lock down shot for a background plate, but our creative team brainstormed a solution that worked surprisingly well – And changed the way the industry shot background plates.

Exploration is always fun and exciting when the director is already confident his key shots have been covered. So planning time for those opportunities makes for a great film shoot.