Rewriting the Rewrite in 5 Steps

Rewriting the short film Family Law consumed my time a few years back, but it was worth the effort once the film festival season began. The film took home numerous awards including: Best Screenplay and Best Actress. I therefore decided it would make for good examples in my sharing of the rewriting process.

The premise of the film is:

Law firm partner Carol Peters fights to keep the legal sharks away from a teenage boy who wants emancipation from his oppressive home life. Cornered by the boy’s choice, Carol risks disbarment unless she can find the deal-changing answer in a gentle whisper.

During the rewriting process I had numerous conversations with a copy editor and the film’s star, Francine Locke. Both were experts in their field, but neither fully comprehended the rewriting process. In fact, while Francine loved the over all story, she felt the dialog was too “in her face and wordy,” which it was in the draft she read.

I explained the process and pointed out how in the first draft I tend to write the dialog “on the nose” to make sure I understand what information needs to be presented to the audience. It’s not until a later draft, when I deal with subtext, that I rewrite the dialog. This explanation made me realize that there are many beginners in the industry that may not have a handle on the rewriting process, so I decided to share a few thoughts.

Here are five steps that will help the rewriting process.

I haven’t met a writer who didn’t love their first draft. This is a byproduct of a writer’s attempt at reducing their great story ideas to writing. However, as a script doctor, I’ve had to inform many writers that their job wasn’t done after the first few drafts. It takes several attempts to get the writer to realize that he only placed the foundation of the story on the page and not the fully envisioned movie.

Through self-examination of my emotions and a second objective look at my story, I found that my first draft scripts aren’t close to what they’re meant to be. The reality is that while my story concept starts to surface in the first draft, the rest of the story needs to be fleshed out through additional rewrites.

A few years back, I was invited to an awards ceremony at the Beverly Hills Hotel, which gave me an opportunity to chat with two of the Oscar winning writers of the movie Cars. They shared how it took them three years to rewrite the story with some scenes having as many as 22 rewrites, winning them an Oscar and sequel.

2. Throw Away the First Draft

Unfortunately, most writers fight to keep as much of their original writing in tact. This lowers the quality of their story and blinds them from an opportunity of telling the story from a better perspective or from another character’s point of view, which is sometimes better than where we start. My first draft of Family Law was about the teenage boy, but I found a stronger story by shifting the perspective to the female lawyer.

Jack B. Sowards, known for his television Emmy winning scripts, wrote Star Trek: The Wrath of Khan. Until the J.J. Abrams Star Trek reboot, Jack’s story about Khan was considered by fans as the best Star Trek story out of the dozen features released. Jack is a man dedicated to quality and as a matter of practice, he literally gets up out of his chair, walks over to the wastebasket and drops his first draft in.

3. Rewrite the Good to make it Great 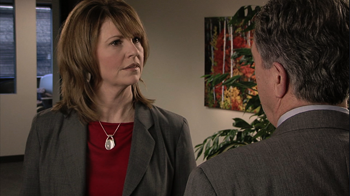 The main reason actress Francine Locke decided to produce Family Law was a desire to find a creative vehicle that could feature her talents at festivals. This type of pressure might typically cause a writer to make only slight adjustments to a script, missing an opportunity of making it great. I’ve personally learned that greatness can only happen when the writer is willing to scrap what is good to make room for what is great.

Just about everyone wanted me to change the climax in Family Law to make it bigger, but they missed the important fact that it needed to be realistic, plausible and lead into the resolve. While I accepted some rewrite recommendations, I chose to hold to my third draft version of the climax. The result during sneak previews, I watched every person tear up during the climax, proving that a writer should only rewrite what he or she agrees would improve the story, not just change it.

4. Be Clear, Not Obvious 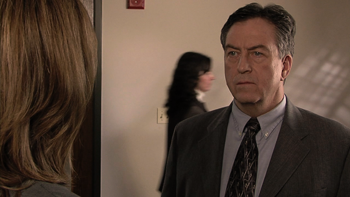 Every rewrite should help clarify the story and main character. It’s important to keep the audience in the emotional flow of the story and not bog them down with huge backstory or “in your face” dialog. The writer’s focus should be on bringing out the characters and plot, rather than muddying the waters with attempts at iconic phrases like “I’ll be back.” French writer Gustave Flaubert suggested that the “artist should be felt everywhere and seen nowhere.”

In Family Law I found myself writing what I perceived as a perfect climax and resolution, but some people were concerned that the audience might not catch the visual nuances that turn the story into a grand slam. Francine even asked if I should write a more obvious ending. However, with me being a person who always understands a film well before the writer hits me over the head so I “get” his film, I decided to trust that my audience would be more visually intelligent, than not. I kept my ending.

5. Take Time for another Rewrite 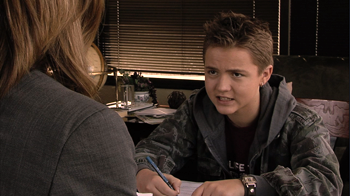 Going into a film project with a goal of seven plus rewrites helps me to depersonalize the story and see it objectively. While I’m not suggesting that my passion drops, I am being realistic about the numerous drafts that lead to a successful story. Many screenwriting consultants have been quoted saying, “Screenwriting is not about writing, but rewriting.”

The Script Supervisor from Family Law asked her screenwriting professor about the number of rewrites it takes to make a good script great. The professor cited a student who did two rewrites, and then sold the script to a production company, who then did two more rewrites before production. While the professor suggested that four rewrites was all that was necessary, the Script Supervisor couldn’t help but wonder what the minimum number of rewrites would be to guarantee a strong and tight story.

For me, Family Law, a six-minute short film, took five rewrites in order to pull on the heartstrings of the audience and deliver the theme to their heart. Had it been a feature, I’m sure the rewrites would have been well over a dozen or two.

I learned a long time ago that rewrites are not something to avoid, especially since the WGA makes sure you get paid well for rewrites. Instead, it is a tool to double check the tightness of your characters, plots and subplots, emotional patterns, dialog, etc. If each rewrite focuses in on just one area of a script like format, continuity, visualization, etc. it would take a minimum of a dozen rewrites to make sure every aspect of a script is excellent.

The script writing process is all about rewriting. The fear of having too many rewrites is only held by beginners, as the professional counts on polishing each aspect of his story through the rewriting process. When you have a powerhouse actor on your film project like Tom Hanks, you plan on lots of extra rewrites to live up to his excellence in performance. Tom Hanks’ Cast Away saw 250 rewrites over five years before he was ready to film, leading to 22 nominations and 11 awards.

4 thoughts on “Rewriting the Rewrite in 5 Steps”