I recently watched a trailer for a new independent film that seemed to be a mini story in its own right. The clips were so well put together and the ending so clear that I was completely satisfied and didn’t need to see the film. That same day I saw another trailer that gave me just enough information to be curious, which drove my need to see more. Curiosity festered within me until I had to see the film. 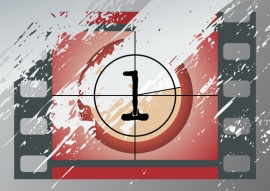 Trailers must create that sense of desire and curiosity to draw an audience. By raising a question in the audience’s mind, the filmmaker forces the audience to seek out the answer and purchase a ticket. Unfortunately, filmmakers struggle with knowing what part of the film should be promoted and what part withheld for for the film’s theatrical release.

This delicate balance can be achieved using a few rules:

USE SET PIECES FROM FIRST HALF OF MOVIE – Set pieces are scenes that are designed to have an obvious imposing effect on the audience and many times end up in trailers. They are also the scenes that stand out and say this film is unique and special. When done correctly, the scenes are easily remembered and generate a good deal of marketing buzz.

A strong set piece withstands the test of time. Many remember the light saber battle between Darth and Obi-wan Kenobi. Another iconic set piece was the scene where Indiana Jones runs away from the giant boulder. I’ll never forget the DeLorean racing across the wet mall parking lot and seeing it vanish into a pair of fire trails in Back to the Future.

Set pieces distinguish a film and drive the buzz that skyrockets a title to success. It becomes the story’s leverage to entice audiences to shell out money for tickets. It also tells the press that the film is new and fresh, making it newsworthy and promotable.

USE ACT ONE HERO AND PROBLEM SET UP – The hero has to be likeable or his situation relatable to the audience. By introducing him in a humorous way, or by establishing some form of crisis that people can relate to, will all help build a desire in the audience to find out how the hero will deal with his dilemma.

Establishing the hero’s flaw or problem is also prudent, but only using enough of it to establish the question of how it will be solved. “Why” answers satisfy and “what” answers generate conversation, which leads to ticket sales.

NEVER USE ANYTHING FROM ACT THREE – By act 3, the audience knows exactly where the story is headed, but don’t know how they will arrive at the climax. If something is used from act 3, it’ll be too easy for the audience to determine the film’s outcome before they see the movie. Act 3 elements are sacred and are considered off limits in the promotion of a film.

DON’T USE THE THEME – The theme is typically associated with some form of moral or social lesson. It’s a part of the story that should never be revealed during promotions because once a person understands the lesson there is no longer a need to see the film. Many times the lesson might seem forced unless it’s properly woven into the full story, which a trailer can’t do.

The above rules will keep the filmmaker safe from giving out important information that needs to be saved for the film.  It also positions the filmmaker’s mindset to focus on the action he wants the audience to take – purchasing a ticket so he or she can watch the film and  answer the question haunting his or her mind.