Getting Captain Action to Safety

I was undercover, as much as a grade schooler could be. My grandma didn’t notice me slip upstairs to my bedroom. She was too busy spending time with my sister on a sewing project. But it didn’t matter. I had received a secret assignment from an invisible branch of the government known as the Action Alliance. It was my job to get Captain America past the canyon and to the new flight port behind our rickety garage. 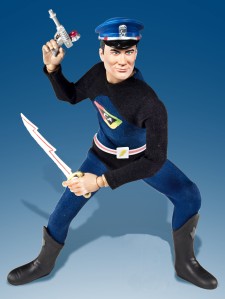 With my Captain America toy in hand, I proceeded to open my second story bedroom window and climb out. I had seen workers on our roof before and knew that I just had to be careful with my footing to avoid falling off. I wasn’t afraid, as my new sneakers would grip the shingles and keep me safe.

The roof was steeper than it looked from the ground so I had to lean toward the peak of the roof as I climbed. I was startled when Mrs. Williams shouted with panic in her voice, “Get down from that roof or I’ll call the police!” My heart raced. Fear shot through my veins. I was petrified, well, that was until I realized that if I moved to the end of the roof I would be able to see the entire back yard from a bird’s eye perspective.

The view was incredible at 35 feet.

I checked the parachute on Captain America and tossed him high into the air out over the backyard. The Captain peaked from my toss and started to fall, forcing the parachute to pop open. The sight was amazingly beautiful, as I watched the Captain slowly drift down into the yard. Once he landed I headed back to my bedroom window.

By the time I got downstairs I could hear my grandma talking with Mrs. Williams at the back door. I moved to the kitchen and tried to figure out who was winning the argument. Mrs. Williams saw me and glared. She was satisfied that I was off of the roof and headed home.

Grandma turned to me and asked, “What kind of trouble have you been getting into?”

I shrugged my shoulders and headed into the backyard to play. The Captain had landed within a few feet of the new flight port, so I picked him up and wrapped the parachute for another jump. I climbed on top of the garbage cans and then shimmied onto the garage roof.

The roof was less stable than the house since the garage was on an angle. My dad suggested at dinner a few days earlier that it would soon fall over. But for me, it was the perfect launch point to toss Captain high into the air and watch the chute pop open for another successful mission. The Captain landed perfectly in the sandbox, which was next to the flight port.

It didn’t take long for the Action Alliance to congratulate me on getting Captain back safely. He had just completed an intelligence mission tracking the notorious Chet Dagon, super lord of the evil swazitey empire. I knew that a call would come requesting my expertise in the near future, but for the time being I headed into the kitchen for some milk and cookies