Review: Snow White and the Huntsman

Breaking $70MM in its first week wasn’t a problem for this artistic expression of Snow White. The real problem focused on the production company using tall actors to play the dwarfs. The decision to digitally shrink actors was ridiculed by the “Little People of America” organization, who blasted Universal Chairman Adam Fogelson, saying it’s “…the equivalent of Universal casting a white actor to play a role written for an African-American person and digitally changing the color of their skin.” 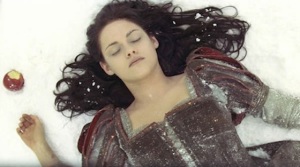 Despite the use of special effects to resize the actors as dwarfs, the film has already made great inroads as a cultural phenomenon, causing animators to wonder how many more animated pictures will be redone as live action films. This instant popularity drove the announcement that the sequel “Snow White and the Huntsman 2” will begin development.

The film was made very well, but it’s not your child’s Snow White due to the dark production values. Still, aside from the dark forest, the film is rather tame with the exception of the CGI rendered battle scenes. Then again, the awesome mirror effect is a bit ominous and foreboding for younger viewers and down right cool for adults. 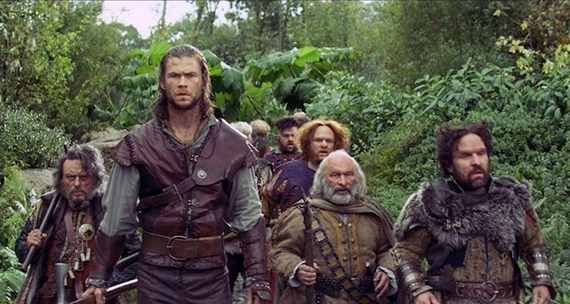 Kristen Stewart (Snow White), gave me a flashback when she was laid out in the sleep scene, because it was so similar to her “Twilight” death scene. She of course excelled at her pouty look and salted in several moments that made you believe she was Snow White, rather than a vampire.

Chris Hemsworth (The Huntsman), brought a very different performance to the screen compared to his Thor character from “Avengers” and his George Kirk character from “Star Trek.” I’m convinced this actor can play any role given the right direction and time to develop a character. 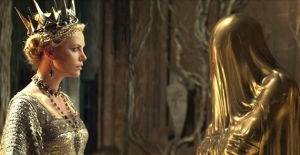 Charlize Theron (Ravenne), was the consummate actor she’s always lived up to with great excellence. And yes, the milk bath scene raised a few eyebrows, but never pushed the film’s rating. What I found remarkable was how well integrated her aging CGI was with her true skin. Add to it her great performance, and she was believable young, middle aged, and decrepitly old.

If you haven’t seen it yet, the film is worth your time, although you may be fighting your childhood memories with this artistic version taking significant liberties. And, what I found more fascinating than the rebooting of my thoughts about the story, was how stylistically this version fits this generation, just as much as Disney’s version fit the generation viewing his classic for the first time 75 years ago.

3 thoughts on “Review: Snow White and the Huntsman”