Most poor films die in the second act, but this little known religious war film has a very strong second act. Its first act is a bit confusing and its third act doesn’t give the pay-off hoped for by the audience, but its ride during the second act is worth watching the film. 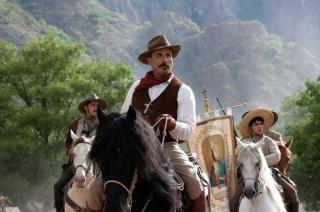 This film is a finely crafted Mexican movie that stars Andy Garcia, and believe it or not, is shot completely in English – A bit odd for a foreign film. The film did rather well in Mexico with a box office of $4.1MM under the title of “Cristiada.” Fox released the picture this past weekend on 757 screens and brought in $1.8MM in its first two days.

This true life western doesn’t fit the typical Hollywood fare, as the gunplay is missing a grand Hollywood budget. However, it seems to be very true to the Cristero War that broke out in 1926 when the Mexican government persecuted Catholics and band their religious practices. The uprising formulated into a rebel army, whose clashes with the government left 90,000 people dead.

The story focuses on General Gorostieta (Andy Garcia), a retired military strategist who takes up the cause, an aging Priest (Peter O’Toole), who is killed in the first act, and a young boy (Mauricio Kuri), who joins the rebel army after watching his priest get shot down by a firing squad for conducting religious services.

The film explores the loss of freedom of religion and the various forms of apathy, compromise, and unorganized uprisings requiring unity to be effective. The film hits a little too close to home when it comes to the unbridled apathy and willingness to compromise our freedoms in the name of security here in the states.

First time feature director Dean Wright, known mostly for his special effects work, wasn’t able to keep the intensity of the second act in the first or third acts. This coupled with its length, gave little room for strong emotional connections with the exception of the little boy who was martyred in front of his godless father and silent mother.

Screenwriter Michael Love didn’t create characters of great depth, but their situations helped to overcome that downfall. However, he did handle the religious aspects of the film with great care, making sure the story’s religious backdrop was handled both subtly and respectfully, to the degree possible based on the true-life tragedy.

This film was one of the best low budget films I’ve seen in years, but it is still a low budget film. If you enjoy history or have a passion for our freedoms, it is well worth your time to watch. And, I’d suggest seeing it in the theater for the sake of the grand vistas, although much of the film is in dark cramped quarters.