Conservatives Bash Their Own While Liberals Control the Media

I recently interviewed a man who grew up in a pro Newt Gingrich household, but he shifted his voting perspective to Romney after wealthy friends shared that he was the only possibility to beat Obama. That was until he learned that his democratic coworkers were supporting Romney. He soon found out that the one person the Democrats had no clue how to attack without alienating middle class Americans was Rick Santorum. 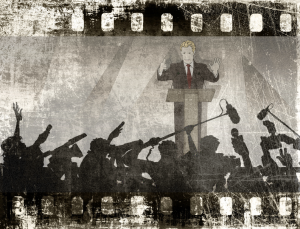 The man continued to explain his appreciation for how the Tea Party originally supported Michele Bachmann and his excitement over Ron Paul’s Libertarian roots and track record. He informed me that neither one was prepared for the attacks by Republicans in the primary.

After chatting further about how a house divided would surely fall, our discussion shifted to “The Hunger Games.” He was thrilled that the film had an anti-big government message. While subtle, he felt it was one little step forward for conservatives, even though the film is morally bankrupt with children killing children.

The conversation shifted to the perfectly timed “Bullying” documentary that released during a time when the Bully agenda was trying to get through the Illinois Senate. He noted that its timing was no mistake, as the film’s release was well planned out by liberals. My response was simple, “What did the conservatives do with the media during the same period of time?” He looked at me like I was crazy.

I couldn’t blame him, as I got on a soapbox about how dozens of films are financed by liberals each year and how conservatives fund few. It doesn’t take rocket science to know that the one paying for the message gets to determine what our country watches. The funny thing is that conservatives love to police the ratings and complain about the content, but they lack in producing great alternative films.

I recently attended an event with numerous filmmakers. Many of us had the opportunity to get significant funding for our next film project, but there was one catch. We had to include one pro gay scene and an anti-gun message. Every liberal filmmaker jumped at the opportunity, while the three of us conservatives chatted about our integrity.

It doesn’t take a genius to figure out that the media drives our society and changes opinions. It only took a handful of tweets for Obama to capture the under 35-year-old vote. And, advertisers see a huge jump in sales every time they invest in product placement with a movie takes off.

So where are the conservative film investors? Why aren’t they funding some incredible stories that can make a positive difference in our children? We live in the age of information and it appears that conservatives have forgotten to show up, allowing liberals to instill in the young a future agenda that will make the last 20 years look like child’s play.