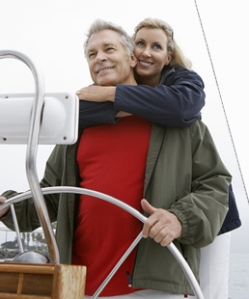 I’ve seen many strained relationships lead to divorce over the past dozen years and most could have been avoided by a couple simple adjustments. Unfortunately, once the word “divorce” is brought into the conversation, each person begins to position and defend him or herself from great heartache. Both know each other’s vulnerabilities all too well and anything becomes fair game.

The wiser couples desire to work on their marriage before it gets into a no win scenario. They take the following five steps to protect their marriage during difficult times:

I’ve found that most marriage problems stem from a gap in communications. While various topics will raise the intensity of the conversation, all relational gaps need good communication flow to be resolved. Regardless of communication there is one other thing that must be in place – Trust.

I know a couple that made a bad mistake. The wife jumped to the conclusion that her husband was having an affair and accused him of it. She was convinced she knew the signs because she had an affair earlier that he didn’t know about. Not only was he surprised to learn of it while she was accusing him, he felt compelled to get back at her by having an affair, which she later rubbed in his face since she saw it coming.

I counted a lot of communication problems in their dilemma, but one thing was certain, they both had lost trust in each other. Fortunately, they wanted to restore their relationship and were willing to work at it in counseling.

After one of their counseling sessions the man paid me a visit. He wanted to know how he could rebuild the lost trust he had in his wife. I told him it was as simple as making several small decisions. He had to extend some small form of trust to her and watch to see how she handled it. If successful, he would extend a little bit more to her and see how she did in earning back his trust. This process would continue until their trust was fully restored.

The goal was to give her little opportunities to redevelop her trustworthiness. With each successful step, she would earn a little bit more trust until they were at the place where she developed a solid character trait of trustworthiness and he trusted her fully.

But he had to start by extending trust to her that she didn’t deserve. And, he had to not micromanage her ability to honor the trust with various forms of judgment. Instead, he needed to just look for movement – Not success.

A large sailboat can be steered very easily by a small little rudder when at sea, but try to steer all that weight when in dock and the rudder will not do its job. There has to be movement for the rudder to be effective.

In the same way repairing a marriage won’t work if one person is setting to the side watching as a judge, ready to pounce on their spouse’s next misstep. The marriage has to be in motion with both people living as a team through the struggles. As each tries to work at their portion of the problem, the other can give gentle words of encouragement to guide them in understanding and action.

I shared that if he wanted to see change in his marriage, he needed to stop judging and start coaching based on his vulnerable heart. It was counter intuitive for him – To open his heart to the one who just ripped it by having an affair. But, movement would be the only way to bring about healing.

The seas got a little darker for them as they learned how to coach each other without judgment, but I assured him that the storm was always darkest before the light shines through. He held his course steady and their trust grew significantly. He even noted that all movement was gently steered with little effort like a rudder moving a big sailboat in motion.

It’s been five years since their debacle and they are acting like newlyweds. Their communication is excellent. They both live as partners taking turns with short moments of coaching when a behavior risks the heart of the other. They’ve learned that nothing is wrong with either of them, but sometimes they may have to adjust a simple behavior based on how it might negatively impact the other. They also learned to be patient as movement is always a good sign, even if things get a little worse before they get better.