I recently had my screenplay, Steele Blue, analyzed by an expert to determine if the story was acceptable to “Christians.” The Christian analyst misread the story, missed the symbolism, and a complete subplot.

Most of his comments led me to believe the messages weren’t overt enough for the Christian market. I had the same type of analysis conducted for the general public and received positive feedback, with the secular market understanding all the messages.

I couldn’t help but think back to the last five Christian films I watched, which had messages so “on the nose” that I wanted to gag. I felt like I was being hit over the head with a Bible. It made me feel squeamish at best. 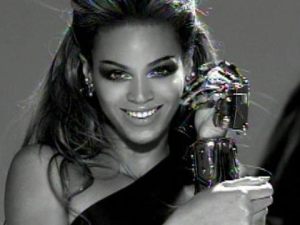 Thinking back to other professing Christians that perform or provide art to the general market, I decided to investigate the song Single Ladies (Put A Ring On It) by Beyoncé. This is a music video that got some Christians up in arms over the women dancing in leotards and “shaking their booty.”

Having watched the self-produced Beyoncé documentary and seeing her pray for her touring crew and knowing about her Bible studies, I accepted at face value that she was a person who wanted to make a difference for Christ, regardless of how deep her walk had come. I even saw touches of that perspective in her lyrics.

Don’t treat me to the things of the world
I’m not that kind of girl
Your love is what I prefer, what I deserve

Now here is a song that suggests a moral perspective and goes a step further in telling the man to “put a ring on it.” The repetitive lyrics point the couple to marriage, rather than the world’s perspective of sleeping together. In my mind that is a good moral message. Unfortunately, there are those that say the message is nullified because of the leotard covered booty shakes.

Just for the fun of it, I looked up the release date of Single Ladies and correlated what I thought would be a decent engagement period. I then looked at the marriage records in several states like Florida, Maryland, Pennsylvania, etc. Every state I looked at showed a temporary bubble in marriages by a factor of ten percent.

In all honesty, the sampling wasn’t high enough to draw scientific conclusions, but it was high enough for me to believe that Beyoncé impacted the way young girls think about their value based on a moral decision, which might have driven more change than the Bible thumping movies I saw.

Now, that’s not to say that there isn’t a market for overt Christian content. In fact, there are thousands of churches in America that preach overt Christian messages that touch the souls of millions. However, if the goal is to touch the un-churched, I think Beyoncé has the right idea. Sending moral messages via the contemporary art form of the day is like sowing new seeds of life into a community void of a Judeo-Christian worldview. It is like a drink of fresh water in the scorching desert of life.

While I might want to tweak Steele Blue so Christians can enjoy the story as much as the general public, it’s the secular viewer that understands the messages I’ve made for them. And, it’s my hope that the audience will take one step closer to developing a Judeo-Christian worldview of life where morals dictate actions.

Steele Blue was never written to drive people to the alter, but instead to be one small piece in a very large puzzle that can make a difference in our lives.

One thought on “Morals Taught with Shaking Booty”