The Equalizer 2 and More

Here is a link to episode 3 of The Story Behind The Stories, which includes my latest film review of The Equalizer 2, a video worth watching for those who like masculine films with a heart for integrity, and a comment on Henry Cavill’s GQ Australia interview about his fears in dating.

Please consider subscribing to this YouTube channel to get every episode. Thanks!

Behind the Scenes, Reviews, Thoughts and Ideas

I got to meet Piff the Magic Dragon last weekend. You might be familiar with his older brother… Steve (were you thinking, Puff?).

No, I didn’t travel to Piffland through the mentalism of Mr. Piffles (his chihuahua). Nor did I head out to see him at his Las Vegas show. Piff came to Chicago, and I got to chat with him (and goof around) before his performance at the Chicago Improv.

Piff is a magician who has been performing for 20 years. But his Piff persona was launched nine years ago and given a big push on season 10 of America’s Got Talent. He received a golden ticket for his performance and headed into the quarter finals, semi-finals, and the finals. Unfortunately, he didn’t get enough votes for the finale.

Piff, or should I call him John Van der Put, also starred on Penn & Teller: Fool Us. While he didn’t fool Penn and Teller, his humor and performance was so appreciated that the guys rated his act their “favorite of the season” and said Piff was “a stunningly good magician.”

I’ve cracked up laughing every time I’ve seen him. After meeting him last Saturday and watching him come up with humorous, off-the-cuff comments, I now consider him the funniest of all magicians that I’ve seen perform—and I’ve watched lots of magicians. 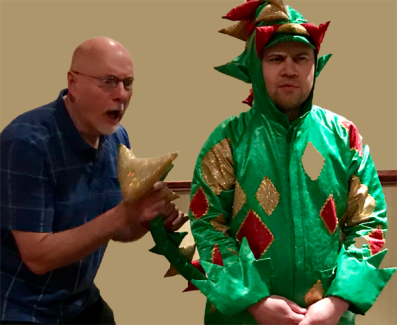 The funniest laugh I got was learning about how John became Piff the Magic Dragon. He was the only one to arrive at a costume party in costume. This drove him to mope around, getting more grumpy as the night progressed. His sharp wit, self-deprecating humor, and deadpan delivery had people laughing throughout the evening. One of his friends suggested he add this persona to his act and Piff was born.

Piff’s YouTube videos have received millions of viewings. He not only has a Las Vegas show, but he has also been touring for the past four and a half years as Piff. His deadpan delivery is so effective that those posing with Piff for selfies work hard to get him to crack a smile. However, one of his crew members who always helps shoot selfies, seems to only click the button when Piff is straight faced.

While some have suggested Piff’s slight 1/32 inch crook in his lips was him holding back laughter, I wasn’t surprised by him joining in the audience’s laughter several times during his live performance. Piff brought people onto the stage to help him with tricks, but they managed to say things that were odd, awkward, or unique, of which Piff took advantage, to generate loud outbursts of laughter from across the audience.

In fact, I laughed so much that I’d have to consider asking Piff to be my best man, er, ah, dragon, should I find Ms. Right—Just kidding… or am I?

“Thinking films” are far and few between, mostly because a small percentage of people take in a movie to be mentally challenged. However, those who kept their mind active during Dunkirk were well rewarded. And, with a bit less effort, many enjoyed Gary Oldman’s brilliant Oscar winning performance in The Darkest Hour.

The next installment of thinking films has arrived for this weekend in the movie Beirut. It’s a fascinating historical picture about several different countries and factions leveraging people and circumstances. They all share common goals of leaning the outcome of the war in their favor, not for justice or humanitarian ideals, but for selfish reasons that include revenge and the control of power.

The simple event is so entangled in the quagmire of jargon and hard-to-follow gibberish that the story seems far more complex than it is. If you’re able to follow the key plot points, you’ll realize that there wasn’t much of a story worth telling. On the other hand, if you were not able to sort through the bad accents and the dingy sets that all looked alike, the picture would seem far more complex.

The compelling situations that brought shock and awe to the American public during the Reagan years were not well captured in the film. The political intrigue was also left out, with the exception of a couple of interesting scenes suggesting how allies might have taken advantage of each other for their own gain.

But the interesting chess-like battle for information between the Palestinians, Israelis, and Americans was not handled well. Nor did the film reference or make use of additional political intrigue surrounding the multinational troops from France and Italy. 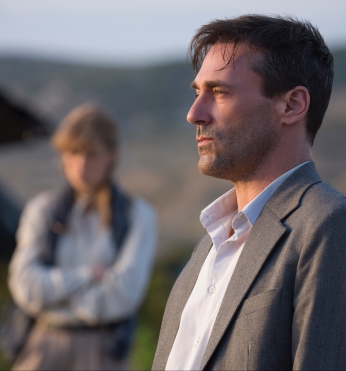 The story focuses on a former U.S. diplomat (Jon Hamm of Mad Men and Baby Driver) being sucked in by CIA operatives (Rosamund Pike of Gone Girl and Hostiles, and Dean Norris of Breaking Bad and Under the Dome) to return to Beirut and negotiate for the life of a friend he left behind.

The quasi-historical story was written by Tony Gilroy (The Bourne Identity, Michael Clayton). “At the time, Beirut was a hot topic because Tom Friedman’s book From Beirut to Jerusalem had just come out,” said Gilroy. “We wanted to put a negotiator in a historical setting where it could feel true to life without actually being a true story.”

Most of Gilroy’s fictional script was built around the 1984 kidnapping of CIA Station Chief William Buckley. “For me, that was very much the model for what would happen if a high-level CIA officer were kidnapped,” Gilroy said. “Buckley’s body actually turned up just as I was finishing the script, and there was a lot of reporting about that case that I drew on. It was all very garish and gothic and horrifying and dramatic.”

Unfortunately, Director Brad Anderson (The Machinist, Transsiberian) didn’t understand the realities of the horrifying, dramatic historical events, and it shows. “I was very taken by the world of Tony’s story. I frankly didn’t know very much about Beirut, so for me it was more the character elements that drew me in,” Anderson said. “I was fascinated with Mason (Jon Hamm) as this tortured soul who’s trying to redeem himself by saving his friend.”

Not all veteran indie film writer-directors are able to express reality-based stories in a way that helps the audience experience or relive the historical moments. Anderson failed miserably at visualizing Gilroy’s fictional account, boring the veteran sitting one row in front of me. He actually pulled out his cell phone and engaged in 5-10 minutes of texting.

As for being spellbound by the characters that Anderson suggested drove the film, I found Hamm’s character to be flat and one dimensional. While Pike gave a great performance, her character was also limited, mostly by too little screen time.

For those who love political intrigue and deep thinking films, this one is a pass in my book. Even with thin character development, Hamm and Pike fans will not be disappointed in their performances, but they’ll have to keep in mind that the script and director tied their hands.