A Day at the Art Festival

The Glen Ellyn Festival of the Arts was at Lake Ellyn this past weekend. There were several dozen booths filled with painted canvases, mounted photographs, custom jewelry, handcrafted pottery, and many other forms of artistic expression. The least expensive item was on sale for $7.00 and the most was $65,000.

Glen Ellyn is a small town that has a strong understanding of the arts. The village has several galleries and an indie art theater. Some would argue that my hometown has more happening in the arts than most culturally elite cities.

I had a lot of fun walking through the booths. It didn’t take long to figure out which booths held artists of the highest caliber compared to people who threw something together and called it art. A simple conversation with each “artist” revealed the truth about his or her status. 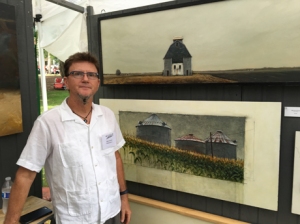 Mark Schroll and I enjoyed a wonderful talk about his selections and techniques. He was a down to earth artist that focused on the details he found fascinating, intermixed with a passion for generalizing Americana in a way that left the person feeling great about life. He seemed to appreciate my interaction, as I dove into the heart behind his work. 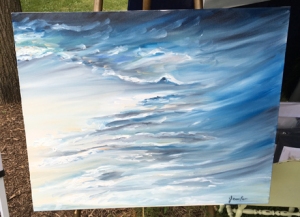 Jennifer Collander’s art caught my attention. There was something about her whimsical style coupled by the pains in life that brought a new perspective to the ordinary. The painting I’ve pictured captured my attention for the longest of time, as I tried to understand the warm swirling feelings it generated for me. It made no sense, except that it made me want to be more expressive in life, which is why I’ve written this post.

Kelly Griffin and I hit it off well. Halfway through our conversation about how she captured her image, she realized that I understood art more than most who pass by. After briefly sharing my background, she talked about her background in television. It didn’t take long to realize that we could artistically collaborate. She also had what it takes to be a great producer.

Laura Gardner was well traveled and captured numerous international sites on canvas, while backpacking. To keep things compact, she taped her canvas to small cardboard palettes for travel and then stretched the canvases after returning home. Her work was beautiful and depicted the true feel of the locations unlike those artists who only paint distant locations based on photographs. 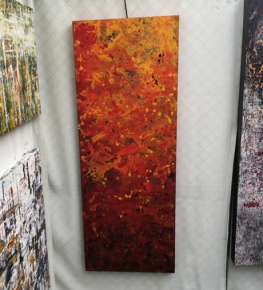 Getting to know each of the artists personally made a big impact in my day. I love engaging with real artists that are not only in touch with their feelings, but have mastered their art in a way that allows them freedom of expression.