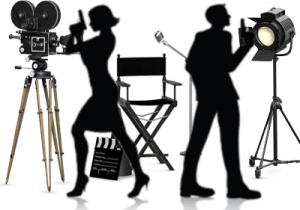 The 49th Annual International Film Festival (Oct. 10-24) is in full swing. Yesterday was the Chicago Film and Media Summit & Expo at the Cultural Center. Tonight is the Chicago Showbiz Networking gathering at Chicago’s Laugh Factory. And, there are several other gatherings this month by multiple Chicago film organizations.

October seems to be the key month when Chicago filmmakers find a new mix of talent and spin great creative projects. Some get fleshed out and produced, while others find no traction. In either case, networking opportunities rise to a new high as well.

Last Friday night, I met with a group of up coming actors who have a great idea for a television series. After reviewing their first draft script, we made alterations to the story structure that would make it ideal for HBO. The energy in the room from all the creative input was tremendous.

I’m not sure if all these networking opportunities play a role in the process, but several film grants are made available in October for Chicago filmmakers. This year one organization has increased their grants to $100,000 with the hope of seeing more films made.

Many times the grants will cover equipment costs. Typically the actors, crew and filmmakers will donate their time to leverage the project for greater visibility with gaining full funding from investors or a studio’s attention. There are also small film projects that are sometimes funded in full by the grants.

Some years back, I won a grant for a documentary that I produced on female barbershop quartets. The grant provided a lot of equipment and film stock, but at the time I was in need of finishing funds. The timing was off due to the quartet’s competitive schedule. They participated in the national competition that took place in the EnergySolution arena – Home of the Utah Jazz.

The timing of networking, festivals and grant applications never perfectly match any green lit film project. Seldom do you sign your entire ideal list of actors, crew and locations. There are few people locked to each project that can determine the timing of the shoot. Most have to find a way to adapt if they want to participate in the project.

November and December will soon follow – The two biggest months for attracting investors due to their need for tax write offs. These last two months will also see several single days of shooting for many companies, as they try to grandfather in their tax incentive program for carry over in 2014.

One thought on “Chicago Filmmakers Get Busy”